If you have ever lost your P.E.O. emblem, you can take comfort that even some of our P.E.O. Founders experienced this!

Alice Coffin lost her pin and some years later it was recovered by Dr. J.B. Combs of Washington, Iowa. He wrote to Alice’s sister that he had found it on the depot floor at Wilton Junction, Iowa, around Christmas of 1870.

Mary Allen Stafford lost her pin in 1882 while visiting her aunt in Washington, Iowa. In 1924, Mary was the honored guest at a luncheon given by Chapter J, Washington. She was presented with a gift, “a little token of our chapter’s esteem.” In the gift box was her original P.E.O. pin which she had lost in the garden of her aunt’s home 40 years before. The pin was restored by the president’s husband, who was a jeweler.

Alice Babb said she thought she lost her pin in 1883 on a visit to Illinois on the train. It was reportedly found by a gentleman who refused to part with it. 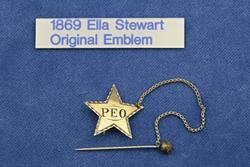 As far as we can determine, Ella Stewart’s pin is the only remaining pin of the original seven still in existence. Ella’s pin is on displayed in the P.E.O. Centennial Center.

This blog post was adapted from a 1984 article in The P.E.O. Record.