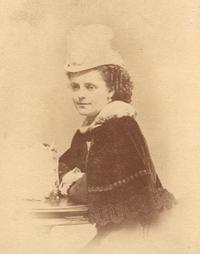 In all accounts, Marie Suela Pearson was the beauty of Iowa Wesleyan campus. She was charming, light-hearted and gracious, as well as intelligent. Her personality was engaging, her social graces were exceptional, and she was an outstanding musician and excellent in elocution, often reciting pieces in tandem with Alice Bird, her "fast friend." Suela was the second youngest Founder and only a college sophomore at the time of her initiation. 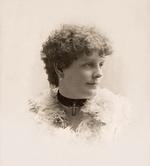 The Pearson family moved to Mount Pleasant from Cleveland, Ohio, in the late 1850s when Suela and her brother, Will, were in grade school. Her father, Dr. Clement Pearson, was an early practitioner of homeopathic medicine. He named her Suela (pronounced Sue-EE-la) after his  favorite character in a Spanish novel. Her mother, Eleanor Rose McKinley Pearson, was a first cousin of President William McKinley. Their large two-story red brick house had an expansive lawn and flower beds in shapes fringed with geodes and shells from the Mississippi River. Their home was renowned for splendid hospitality.

Sue, as she was known by her college chums, received her A.B. degree in 1871, and later an honorary A.M. degree.

This blog post is adapted from We Who Are Sisters: 150 Years of the P.E.O. Sisterhood. It is available to purchase here.