P.E.O. Finds Success On and Off the Court

When Orlando hosted the 2022 Special Olympics USA Games, Haley Waggoner, Chapter GJ, Lincoln, Nebraska, was at the center of the action.She represented Nebraska on the tennis court and her presence was the culmination of her behind-the-scenes work to make the USA Games a success. 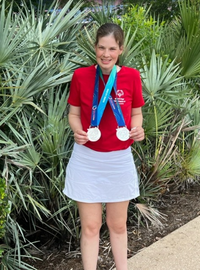 The USA Games are held every four years and unite more than 5,500 athletes and coaches from all 50 states and the Caribbean. The 2022 event brought 125,000 spectators to Orlando in June. The event was a celebration of Special Olympics athletes’ remarkable abilities, dedication and perseverance and an opportunity for everyone to champion a more inclusive world.

“People with intellectual disabilities can do what everyone else does,” Haley said. “It just might be different.” 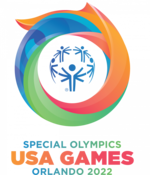 Haley’s involvement with the 2022 USA Games began in 2019 when she was chosen as one of nine athletes to help design the event’s logo. During a weekend workshop  in Orlando, Haley and the other athletes each contributed their own inspiration and individual stories to a collaborative design process.

Haley used her creative skills as a baker and cake decorator for her work on the logo, using frosting to complete her design. Artwork from each participant was used in the creation of the final 2022 USA Games logo and the nine athletes and their families were invited to return to Orlando for the unveiling of the completed logo later that year.

In the lead up to the event, Haley chaired the USA Games Athlete Input Council. Made up of athlete leaders from several states, the group provided regular input to make the event memorable, inclusive and accessible for every athlete.

Finding Success on the Court

On the court, Haley won silver medals in singles and mixed doubles in the highest division. She enjoyed playing against the top players in the country, making new friends and renewing friendships formed in past tournaments. 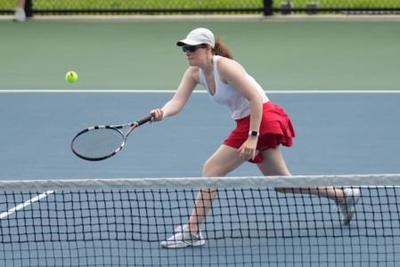 Haley plays tennis several times a week. To hone her skills, she trains with coaches, peers and volunteers. She also plays in a traditional United States Tennis Association community league.

“I’ve been playing tennis year-round for 12 years,” Haley said. “It’s a great sport and I work hard with my coaches.”

Haley became a P.E.O. in 2012, joining her mother, aunt, great-aunt and cousins in Chapter GJ, Lincoln, Nebraska. She often gives programs on Special Olympics and other topics and has served as the chapter’s guard and on the Social and Ways and Means committees. Her P.E.O. sisters enjoy Haley’s baking skills.

“P.E.O has been welcoming to me,” Haley said. “It’s made up of women who care about each other and believe in each other. It’s important that we all embrace our differences and include everyone.”

In June, Haley began a six-month fellowship with Special Olympics International. As part of the organization’s government relations team, she develops resources and trains athletes to connect with their government officials to effect change for people with intellectual disabilities.